The physical and chemical molecular properties are mostly determined by the outermost electronic structure, that is usually represented by a molecular orbital (Highest Occupied Molecular Orbital - HOMO). The abilty of imaging the HOMO structure and following the dynamics induced by an electronic or vibrational excitation would allow to understand how molecules interact with the surrounding environment. The XUV Molecular Tomography technique captures an image of the HOMO through the generation of high order harmonics (HHG) induced in a molecular gas by an intense and ultrashort laser pulse.

The HHG process can be understood in terms of a three-step semi-classical model, in which the laser field (a) tunnel ionizes the molecule, (b) accelerates the freed electron, that acquires a large kinetic energy and (c) drives the electron back towards the parent ion, where it can recombine releasing the acquired energy as coherent electromagnetic radiation in the photon energy range between few eV and hundreds of eV (known as eXtreme UltraViolet, XUV). 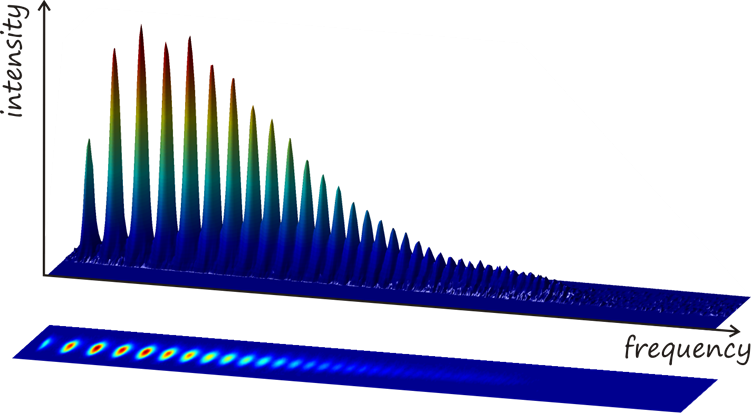 Since this emission process is repeated every half optical cycle of the laser field, the overall emission consists of an XUV attosecond pulse train, that appears in the spectral domain as a comb of odd harmonics of the foudamental laser radiation.

How the HHG process carries information about the HOMO structure? 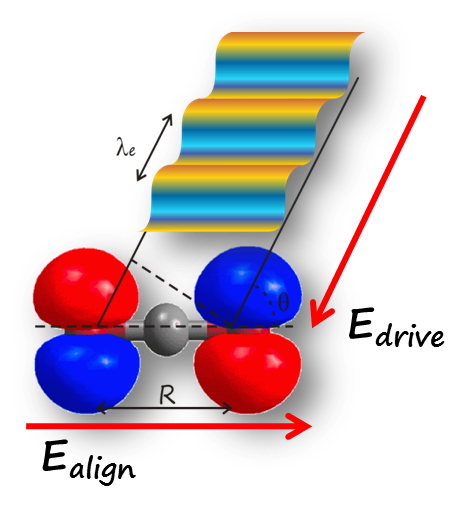 According to a quantum-mechanical description, during the interaction with the laser pulse the molecule is partially ionized and its wavefunction is a combination between the HOMO state Ψ(r) and the free-particle state, that can be approximately descripted by a plane wave as exp[ik·r]. In this combination of states, the molecule emits XUV radiation, whose spectrum in a single emission event is given by I(ω) ~ ω2|<Ψ(r)|r|exp[ik·r]>|2, where (in atomic units) ω=k2/2+Ip and Ip is the molecular ionization potential.

By aligning the axes of the gas molecules at various angles with respect to the polarization direction of the driving laser (alignment that is achieved by all-optical techniques exploiting another ultrashort laser pulse), one will observe XUV spectra having different shapes. The collection of such XUV spectra can be elaborated and interpreted in terms of the spatial Fourier transform of the HOMO, as can be easily seen in the previous equations. Hence, by means of an antitransforming algorithm, one can retrieve the image of the HOMO under investigation. 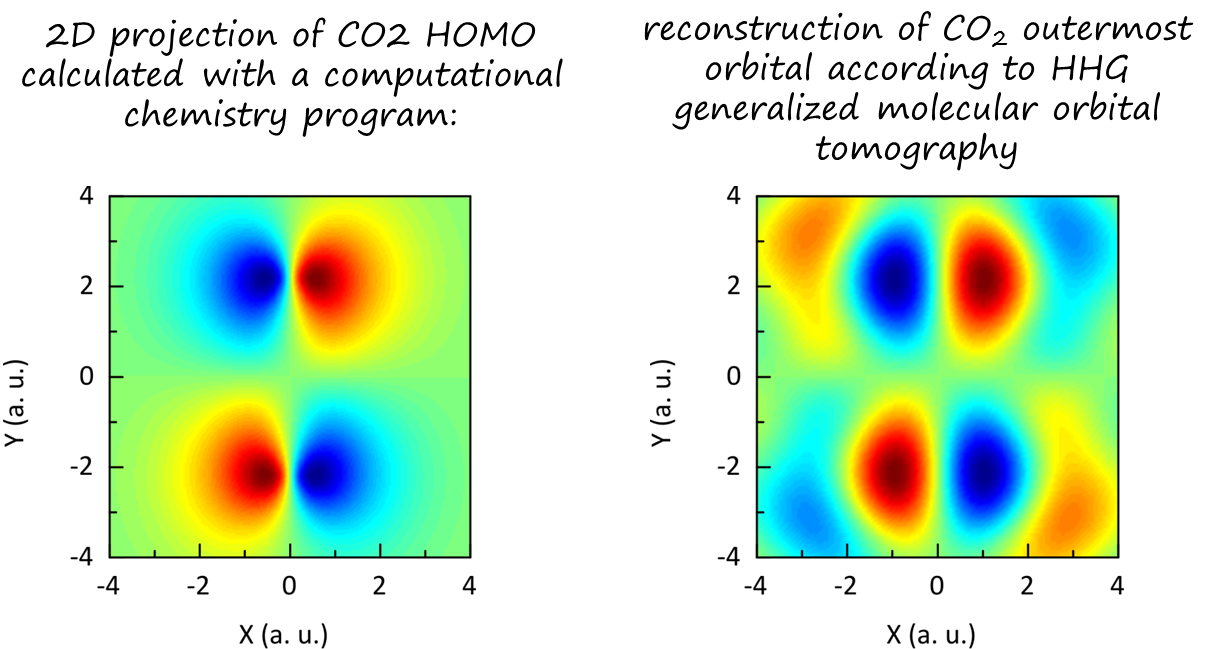 Although the first XUV molecular tomography experiments were performed in 2004 [1], they were limited until 2011 to the nitrogen molecule tomography (N2).

In 2011 the technique has been extended by our research group, operating at the ULTRAS terawatt laboratory, to the triatomic molecule of carbon dioxide (CO2) [2], whose retrieved HOMO is shown in the side figure.

Further studies will be dedicated to the extension of the XUV molecular tomography to more complex molecules and to the analysis of dynamical processes in excited molecules.